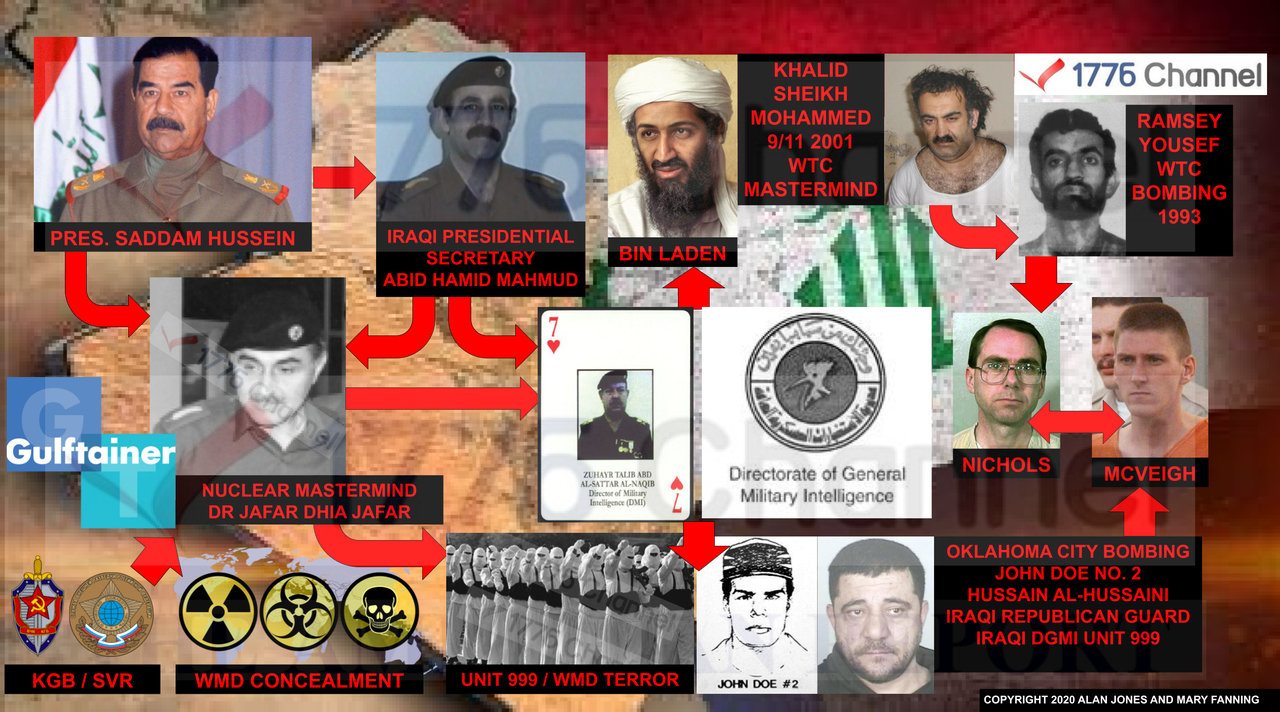 Both Dr. Jafar Dhia Jafar and the Iraqi intelligence service that ran Unit 999 reported directly to Saddam Hussein’s Presidential Secretary Lt. Gen. Abid Hamid Mahmud al-Tikriti, a.k.a. ‘Saddam’s shadow,’ one of the most powerful regime figures within Saddam’s inner circle and another one of Dr. Jafar’s principal Iraqi WMD collaborators.

Jayna Davis, a former television reporter for NBC’s Oklahoma City affiliate KFOR, which doubled as CNN’s local affiliate, was one of the first reporters on the scene of the bombing and told Lou Dobbs during a September 9, 2002 CNN interview:

Several witnesses, 22 in all, have signed sworn witness affidavits and positively identified eight Middle Eastern men acting in collusion with McVeigh and Nichols at various stages of the bombing plot. Those Middle Eastern men, the majority of whom are Iraqi soldiers. One soldier in particular, Lou, is Hussain Al-Hussaini, and he was identified by seven witnesses, tying him to Timothy McVeigh, the Ryder truck, downtown Oklahoma City and the getaway vehicle aggressively pursued by the FBI the morning of the bombing …

Immediately following the Oklahoma City bombing, the FBI issued an All Points Bulletin advising citizens and law enforcement to ‘be on the lookout” for a Middle Eastern-looking suspect. The FBI distributed a sketch of ‘John Doe No. 2.”

In the hours and days following the brutal Oklahoma City attack, military and intelligence analysts arrived at a near-unanimous conclusion — that the Oklahoma City bombing had the fingerprints of a sophisticated Middle Eastern terrorist operation.

Then, the story from the FBI changed.

“The [Oklahoma City] FBI bulletin was quickly and mysteriously withdrawn,” the Wall Street Journal reported. “The original warrant for John Doe No. 2 described a man with “a tattoo on his left arm.”

Davis and Colonel Lang initially connected Al-Hussaini to Saddam’s Republican Guard by studying a tattoo on Al-Hussaini’s left arm that depicts a snake wrapped around an anchor.

Al-Hussaini, a former Iraqi soldier detained after the Gulf War in a desert POW camp in Saudi Arabia, entered the United States in 1994 as a self-proclaimed ‘refugee’ seeking asylum from Saddam’s regime.

“In the years following the Gulf War, the U.S. allowed 12,500 Iraqis to enter the U.S., including up to 6,000 ex–prisoners of war,” LA Weekly reported. Rob Frazier, a former U.S. State Department official in Saudi Arabia who dealt with refugees at the camp, including Republican Guard troops, “received many reports … alleging that the camp harbored ‘sleeper agents’ for Saddam Hussein.” “‘Remember, we really couldn’t background a lot of these guys,’” former U.S. Army intelligence officer Frazier said.

Terry Nichols travelled repeatedly between the United States and Cebu City, Philippines where Ramzi Yousef was planning and directing terrorist operations. Intelligence revealed that Nichols, a.k.a. ‘The Farmer,’ did not have the technical capability to create the bomb(s) that detonated at the Murrah Building or the funds to repeatedly travel to and from the Philippines.

In his book Others Unknown, Timothy McVeigh’s defense attorney Stephen Jones writes that Nichols met with Ramzi Yousef and that Yousef was “an Iraqi intelligence operative.” Bin Laden was in the Philippines at approximately the same time as Nichols and Yousef, according to Stephen Jones.

Al-Qaeda terrorist Ramzi Yousef, responsible for the 1993 World Trade Center bombing, is the maternal nephew of 9/11 mastermind Khalid Sheikh Mohammed (KSM). KSM was apprehended and convicted as the mastermind of the September 11, 2001 attacks on the World Trade Center twin towers and the Pentagon.

“After the 1981 Israeli raid on Iraq’s Osiraq [Osirak] nuclear research facility [a nuclear WMD facility at Tawaitha that was directed by Dr. Jafar Dhia Jafar], [DGMI a.k.a.] al-Istikhbarat [the Iraqi spy agency that commands Unit 999] turned to the Soviet KGB for assistance. From 1982 to 1985, the KGB aided [DGMI a.k.a.] al-Istikhbarat in concealment and protection techniques of its military program and facilities, as well as strategic reconnaissance deception methods,” according to the Middlebury Institute of International Studies at Monterey.

The Middlebury Institute of International Studies at Monterey also revealed that:

Al-Amn al-Khas [the Iraqi Special Security Organization — S.S.O.] watched over the activities of [DGMI a.k.a.] al-Istikhbarat [the Iraqi spy agency that commands Unit 999] and the KGB during the Iran-Iraq War. The KGB advised these agencies in techniques of concealing covert weapons production facilities. It served as the central coordinating body between the Military-Industrial Commission [MIC] al-Istikhbarat [DGMI] and al-Mukhabarat, and the military in the covert procurement of the necessary components for Iraq’s WMD. During the 1991 Gulf War, it was put in charge of concealing SCUD missiles and afterwards, of moving and hiding documents from UNSCOM inspections relating to Iraq’s weapons programs. Based on these past activities, it would presumably continue these functions in the future.

Dr. Jafar Dhia Jafar received decades of technical assistance from Soviet KGB officers and Russian Federation SVR and GRU intelligence officers, in coordination with Russian Ambassador to Iraq Yevgeny Primakov, a KGB/SVR superspy known as “The Bear in the Desert.”

Yes, Iraq did have weapons of mass destruction.

According to John A. Shaw, former Deputy Undersecretary of Defense for International Technology Security, and Bill Tierney, the former head of the U.N weapons inspection team in Iraq, there were WMD in Iraq.

“I am absolutely sure that Russian Spetsnatz units moved WMD out of Iraq before the war,” stated John Shaw, Newsmax reported.

Former U.N. weapons inspector Bill Tierney explained during a CBN interview about the Saddam Tapes, audio recording of Saddam’s cabinet that Tierney translated for the FBI:

We showed that the Iraqis had no intention of ever complying with the U.N. Security Council Resolutions…

…  It [The Saddam Tapes] ended up in my lap. And because I was a UN [weapons] inspector …one of these tapes, it was one briefing after the other, both for unconventional weapons of mass destruction and conventional

… I was at CENTCOM for five years and during that time frame there was evidence that the Russians helped the Iraqis on a technical level. Now probably, earlier, they taught them how to conceal.

“Beyond President Saddam’s family circle, the key figures can be counted on one hand … By far the most important is the one with the most menial title – President Saddam’s secretary,” The Guardian reported. “[Presidential Secretary] Mahmoud … is the third or fourth most powerful person in Iraq, according to exiled dissidents.”

Further cementing Dr. Jafar’s ties to Unit 999 is intelligence out of Iraq that revealed that Dr. Jafar operated a massive biological warfare research lab and production line at Salman Pak, the secret Iraqi military base near Baghdad where Iraqi intelligence services trained Unit 999 spies and terrorists.

Iraqi bioweapons scientist Rihab Tata, known as ‘Dr. Germ,’ “rose to run a 150-person bio-weapon operation at the infamous Salman Pak facility, which inspectors once dubbed germ-warfare central,” according to a newswire story posted by UCLA’s Department of Epidemiology.

Al-Saadi, like Dr. Jafar, was one of Saddam’s three deputy ministers of military industrialization who served as Saddam’s WMD scientific advisers.

In his New Yorker Magazine article “The Unknown: The C.I.A. and the Pentagon take another look at Al Qaeda and Iraq,” Jeffrey Goldberg reported:

In interviews with senior officials, the following picture emerged: American intelligence believes that Al Qaeda and Saddam reached a non-aggression agreement in 1993, and that the relationship deepened further in the mid-nineteen-nineties, when an Al Qaeda operative—a native-born Iraqi who goes by the name Abu Abdullah al-Iraqi—was dispatched by bin Laden to ask the Iraqis for help in poison-gas training. Al-Iraqi’s mission was successful, and an unknown number of trainers from an Iraqi secret-police organization called Unit 999 were dispatched to camps in Afghanistan to instruct Al Qaeda terrorists…

…According to several intelligence officials I spoke to, the relationship between bin Laden and Saddam’s regime was brokered in the early nineteen-nineties by the then de-facto leader of Sudan.

The Obama administration, in a secret operation code-named ‘Project Pelican,’ brought Gulftainer inside the wire in 2014 when it awarded Gulftainer with a 35-year lease to the cargo container terminal at Florida’s Port Canaveral, stealthily bypassing the required National Security Threat Analysis and CFIUS review. Gulftainer went on to take over Delaware’s entire Port of Wilmington in a 50-year deal — without a CFIUS National Security Threat Analysis.

A paradigmatic example of the application of Sun Tzu’s principle of deception in warfare is the Russian-designed WMD delivery system the Club-K (Klub-K). The Club-K appears to be a standard intermodal cargo container, though it delivers devastating weapons of mass destruction far beyond anything seen at Pearl Harbor or on 9/11.

Gulftainer entered into a joint-venture with ROSTEC / ROSOBORONEXPORT, the Russian state-owned weapons enterprise that exports the Club-K Container Missile System.

U.S. missile defense systems look outward toward the Polar region and East, and West Coasts, but are not designed to detect cruise missiles launched from the interior of the United States.

A Club-K surprise attack could launch conventional, nuclear, EMP, chemical, and biological weapons from cargo containers positioned inside the United States and strike U.S. cities and U.S. military bases within minutes, or seconds, with no advance warning.

The effects of an EMP attack launched against the United States from Club-K ‘containers’ would be devastating. Destruction of the national power grid would severely degrade military readiness and rapidly lead to civil unrest and mass starvation.

“An EMP weapon is a civilization killer,” Dr. Peter Vincent Pry, a former CIA officer and Executive Director of the Task Force on National and Homeland Security, told The American Report.

Saddam and the inner circle of his cabinet of which Dr. Jafar was a senior member, could be heard on the ‘Saddam Tapes,’ musing about a ‘terrorist,’ that could not be traced back to Baghdad, placing and detonating a chemical, biological, or nuclear weapon in Washington D.C.

That is exactly the type of mission for which the Iraqi DGMI Special Operations Group Unit 999 trained.

It remains unclear if current U.S. national security officials are aware of the connection between Gulftainer and Unit 999, the Iraqi special operation group that former senior intelligence and Pentagon officials suspected of being at the operational center of the Oklahoma City bombing plot — or if stay-behind Unit 999 sleeper cells remain inside the United States.

However, former Iraqi Directorate of Military Intelligence (DGMI) Lt. Col. Abu Muslim al Turkmani went on to become second-in-command to Islamic State Caliph Abu Bakr al-Baghdadi and oversaw the caliphate’s Iraqi territory before he was killed in a U.S. drone strike, raising questions about how much of the DGMI’s secretive command structure remains intact .

Gulftainer and its affiliates exhibit many hallmarks of an Iraqi dual-use enterprise similar to Iraqi front companies that operated throughout Iraq’s WMD-industrial complex —  companies capable of, on a dime, transitioning from legitimate commercial activity, to covert prohibited WMD activity, and back again to commercial activity.

Gulftainer may have already gone operational.

In the next 9/11, hijacked aircraft could be replaced with dozens, hundreds, or thousands of Russian Club-K Container Missile Launching Systems.