Home National Security Intelligence Obama Exposed: There Were No FISA Warrants, There Was No Incidental Surveillance,... 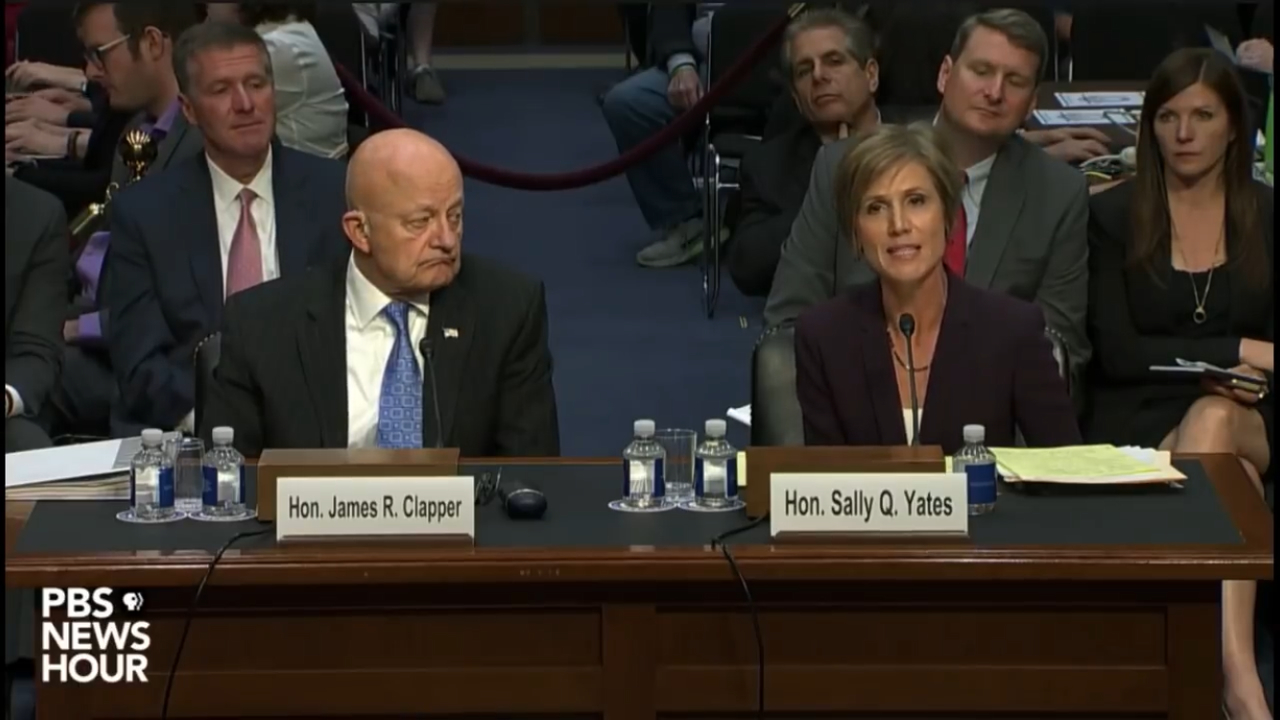 For years, Sally Yates and James Clapper were acutely aware that the Obama administration was engaged in illegal domestic surveillance.

The government was desperate to get back Dennis Montgomery’s evidence, even if it meant granting Montgomery whistleblower immunity.

Brennan and Clapper, Montgomery says, illegally commandeered a U.S. government foreign surveillance tool known as The Hammer, then relocated that system to Fort Washington, Maryland on February 3, 2009, according to The Whistleblower Tapes.

FBI Director Robert Mueller provided the computers for The Hammer, according to Montgomery.

Sally Yates Plays Her Part In The Scheme

Within one month of her confirmation, Yates barred the DOJ Inspector General (IG) from the DOJ’s National Security Division, which had already taken possession of SAP information that Montgomery had turned over to Judge Lamberth. The DOJ National Security Division and the FBI were in the process of setting up arrangements for Montgomery to turn over additional information contained in the 47 computer hard drives.

Assistant U.S. Attorney Deborah Curtis was at the  DOJ National Security Division. Curtis not only took Montgomery’s testimony in a Sensitive Compartmented Information Facility (SCIF) at the FBI Washington D.C. Field Office, she also went on to join Robert Mueller’s Special Counsel hoax Russian Collusion investigation team and became the lead prosecutor of General Michael Flynn. Subsequently, Assistant U.S. Attorney Deborah Curtis stepped down from her position as the lead prosecutor on the Flynn case and left the DOJ on September 27, 2019.

However, in October, 2018, Baker testified before a U.S. House of Representatives joint committee:

But the DOJ Inspector General would never see Montgomery’s evidence because, several months earlier, Sally Yates had barred the DOJ IG from the DOJ National Security Division, where both she and Deborah Curtis worked.

With the DOJ National Security Division free of the Inspector General’s oversight, there was no one to inspect the DOJ for the commission of crimes — and commit crimes they did.

Before firing off his very direct line of questioning, Senator Graham laid out the overall situation to Clapper and Yates:

Clearly, he [incoming National Security adviser Flynn] is talking to the Russians and we know about it. So if there is no FISA warrant — and I’m going to find out about this by the way — the other way that we know about what he was talking about with the Russians is if he was incidentally surveilled. So those are the two options.

Senator Graham did not appear to be aware that there existed a third option: That option is known as The Hammer.

Senator Graham then shifted his attention to General Clapper. “Do we know who unmasked the conversation between the Russian ambassador and General Flynn? Was there unmasking in this situation?”

“Are you looking at me?” replied General Clapper like any other suspect out of a mafia flick .

“Do you, Ms. Yates?” Senator Graham then asked the petrified-looking Sally Yates.

“I can’t speak to this specific situation,” Yates answered with a stunned, deer-in-the-headlights look.

“Neither one of you did it?” Senator Graham asked point blank.

Someone had dropped that information about General Flynn to the complicit Washington Post. The cabal wanted to set the narrative that General Flynn was a traitor. They tried to frame Donald Trump with the same narrative — that he was a ‘Russian asset.’ In both cases, it was nothing but filthy lies. Strikingly, they were setting up a duly-elected President of the United States with an avalanche of damnable lies.They schemed against President Trump. And they schemed against General Flynn.

Never was there such a magnitude of criminality seen In the United States of America before. One might have expected that this group of people worked for America’s adversaries.

There would be no proof. There were no FISA warrants. There were no incidental surveillance documents to cover for their lies. The lack of proof exposed that Barack Obama had gleaned the information about General Flynn from another source — an illegal source.

The stench of fear filled the chamber. Clapper and Yates knew that they had made a fatal misstep.

The “incorrect narrative” was being set. They had not gotten their lies straight. The train had derailed.

F*CK! Clapper and Yates through Graham questions are all playing into the “there should be an unmasking request/record” for incidental collection incorrect narrative.

Their texts then suggest that they scurried off to meet one another:

I’m free if you have two minutes.

An hour later, apparently after meeting once, Agent Strzok had another question that would require a second in-person meeting:

Hey if you have time and it’s not super late, have a follow up q for something you said. I know you’ve got Bill’s session now…

Strzok and Page framed General Flynn. And that is a crime.

President Obama had intelligence on General Flynn and knew what he had said on confidential phone calls.  Yet, there were no FISA warrants nor a documented record of incidental surveillance. Barack Obama was getting his information from another source.

General Flynn had commented that the Obama Administration had armed al-Qaeda and ISIS terrorists. Those terrorists had perpetrated a genocide of Christians across the Middle East.

President Obama, with his henchmen Brennan and Clapper, targeted General Flynn. Apparently they had no compunction about throwing into prison a decorated veteran who had honorably served his country for 33 years.

General Flynn, working as President Trump’s national security adviser, would have known his way around the intelligence community like few others. General Flynn began his Army intelligence career in 1981 as second lieutenant.

The cabal schemed and they lied, then they lied and they schemed. They plotted to charge General Flynn with Logan Act violations. When that didn’t fly, they attempted to frame him with the ludicrous accusation that General Flynn plotted to have Fethullah Gülen kidnapped. In order to get General Flynn to cooperate, they then set their sights on his son. There was nothing they would not do to take down General Flynn. Their criminality knew no limits.

In January 2017, just days before President Trump’s inauguration, the outgoing Obama administration greatly expanded the number of intelligence agencies that could receive raw NSA signals intelligence data. President Obama, Clapper, and Brennan, just before they got out the door, appear to have been attempting to obfuscate the source of domestic intelligence illegally collected by The Hammer. With so many agencies in possession of the raw collection data it would become near-impossible to track the source of illegally-collected domestic intelligence or the source of any leaks. It would be the perfect cover for the CIA, which, under the Obama administration, had clearly been operating in violation of its own charter. Any leaks or illegal surveillance could be blamed on mishandled NSA data.

Over the course of his 33-year military career General Flynn had unmasked only one American, and that was because that American had met with a known terrorist, according to his attorney Sydney Powell.

General Flynn understood the legal boundaries of surveillance and the implications of bypassing the rule of law, in contrast with Obama, Brennan, and Clapper, who held the rule of law in contempt. Consequently, Obama and his henchmen set out to destroy General Flynn.

U.S. Air Force Lt. General Thomas McInerney (Ret.) remarked on the outrageous abuse of The Hammer by Obama, Brennan, and Clapper and decried their activities as being “worse than Watergate.”

General McInerney and U.S. Navy Four-Star Admiral James A. “Ace” Lyons (Ret.) presented The American Report’s March 17, 2017 exposé on The Whistleblower Tapes and The Hammer to Dr. Dave Janda, host of ‘Operation Freedom’ on WAAM TALK 1600.  During the March 19, 2017 broadcast of Operation Freedom, General McInerney took the story of Dennis Montgomery and The Hammer to America’s airwaves. Within minutes, Strzok and Page were texting one another.

I’m not going to respond to the whole group. The Klayman/Montgomery stuff in the email Jim just sent is utter BS. Best to say nothing and brief later if necessary.

In December 2018, from his deathbed, U.S. Navy Four-Star Admiral James A. ‘Ace’ Lyons (Ret.),’ former Pacific Fleet Commander, reached over to his longtime friend Air Force  Lt. General.Thomas McInerney (Ret.) and told him “The Hammer is the key to the coup.”

A nation can survive its fools, even the ambitious. But it cannot survive treason from within….for the traitor appears not to be a traitor…he rots the soul of a nation…he infects the body politic so that it can no longer resist.