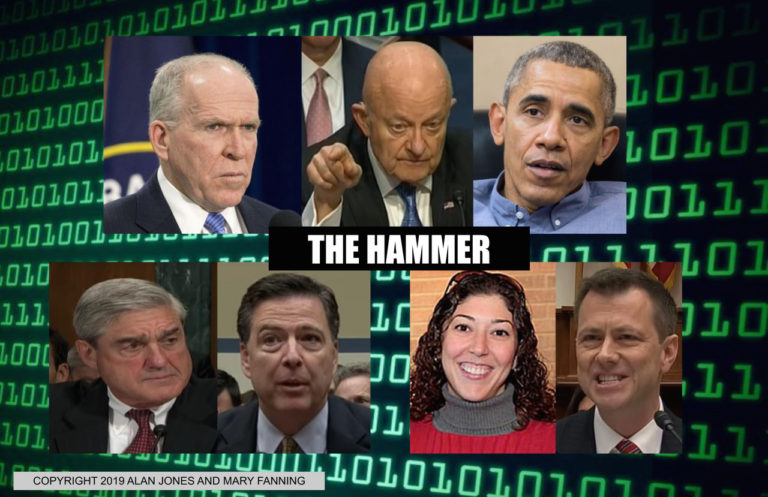 Only a few hours earlier, General McInerney had referenced Montgomery and Klayman on “Operation Freedom,” exactly the same names about which Strzok and Page were now texting.

The next morning, the Russian Collusion investigation was born.

Early the following morning, Monday, March 20, 2017, FBI Director Jim Comey announced before the House Permanent Select Committee on Intelligence that the FBI Counterintelligence Division, where Strzok served as Deputy Assistant Director, was investigating Trump’s connections to the Kremlin, and that the FBI had “no information” to support Trump’s tweet claiming that President Obama wiretapped Trump.

That morning, FBI Director Jim Comey lied to the House Permanent Select Committee on Intelligence and to the American people.

On August 19, 2015, Montgomery turned over to FBI Director Jim Comey’s office 47 hard drives that he alleges contain over 600 million pages of documentation from Brennan’s and Clapper’s secret surveillance system.

Many of the FBI and DOJ officials who were involved in the investigation of Dennis Montgomery’s whistleblower claims about Brennan’s and Clapper’s illicit surveillance system are the very same government officials who ended up on Special Counsel Robert Mueller’s Russia collusion investigation team.

Montgomery also claims that the FBI, under Director Robert Mueller, supplied the computers for Brennan’s and Clapper’s illegal surveillance system that spied on Donald Trump.

General McInerney and Admiral Lyons, two of the highest-ranking retired U.S. military flag officers, men of sterling character and reputation, took the information we exposed on “The Hammer” and President Obama’s illegal spying operations against Donald Trump to a wide audience.

The cat was out of the bag.

The “Whistleblower Tapes” revealed that “computer genius” Dennis Montgomery, working as a CIA/NSA/FBI contractor, created the illicit surveillance system known as “The Hammer” that “hacked into all of America” for President Obama, John Brennan and James Clapper.

Montgomery stated that Trump was wiretapped for years because, he alleges, the CIA feared Trump.

“Whistleblower Tapes: Trump Wiretapped ‘A Zillion Times’ By ‘The Hammer,’

By Mary Fanning and Alan Jones | The American Report

On March 4, 2017, two weeks before General McInerney appeared on “Operation Freedom,” President Trump tweeted “Terrible! Just found out that Obama had my ‘wires tapped’ in Trump Tower just before the victory. Nothing found. This is McCarthyism!”

Instinctively, the jackals knew that their own survival depended upon covering their own Russia collusion tracks and destroying President Trump.

Further raising the stakes, the March 7, 2017 WikiLeaks dump of CIA Vault 7 confirmed the existence of The Hammer (HAMR) in two separate CIA documents (here and here).

The Hammer (HAMR) appears to be a massive supercomputer system that was used to eavesdrop on phone calls by deploying or “throwing” malicious plugins at targeted computers and smartphones to collect the intercepts and then send the data back to the master supercomputer framework.

Other plugins could presumably hack into online banking, messenger, email and other apps and then transmit the collected data back to the HAMR data center.

STRZOK AND PAGE:  “SAY NOTHING”

On a Sunday afternoon, the FBI took notice of General McInerney’s appearance on “Operation Freedom.”

“I’m not going to respond to the whole group. The Klayman/Montgomery stuff in the email Jim just sent is utter BS. Best to say nothing and brief later if necessary” read Strzok and Pages’s second text message.

According to highly-placed sources, General McInerney’s radio appearance “created a veritable sh*t storm in D.C.” and “immediate blowback from the Deep State.”

Comey‘s “right hand men,” FBI Special Agents William Barnett and Walter Giardina, debriefed Dennis Montgomery in a secure SCIF after Montgomery had handed over the 47 hard drives that Montgomery claims prove that under President Obama Brennan and Clapper were running a massive illegal surveillance operation for “leverage” and blackmail.

By Mary Fanning and Alan Jones | The American Report

COMEY FRAMES TRUMP DAY AFTER GEN. MCINERNEY TAKES OUR EXPOSÉ ON ‘THE HAMMER’ TO AMERICA’S AIRWAVES:  LIES TO CONGRESS AND LEADS THE COUP

FBI Director James B. Comey acknowledged Monday that his agency is conducting an investigation into possible coordination between the Kremlin and the Trump campaign in a counterintelligence probe that could reach all the way to the White House and may last for months.

The extraordinary disclosure came near the beginning of a sprawling, 5½ -hour public hearing before the House Intelligence Committee in which Comey also said there is “no information” that supports President Trump’s claims that his predecessor ordered surveillance.

Less than seventeen hours after General McInerney’s “Hammer” revelations, FBI Director Comey announced that the FBI counterintelligence division, where Strzok was Deputy Director, was investigating Trump’s connections to the Kremlin, and that the FBI had “no information” to support Trump’s tweet claiming that President Obama wiretapped Trump.

FBI Director Jim Comey was lying.  Comey had already taken possession of Montgomery’s evidence in 2015 yet Comey proceeded to lie before Congress that there was no illicit surveillance of Trump.

“The proof of Donald Trump being wiretapped is in the documents that were handed over to the FBI” Montgomery’s attorney Larry Klayman told reporters Fanning and Jones.

Montgomery stated during a May 14, 2017 interview on the “Special Prosecutor with Larry Klayman” radio program:

I provided to the FBI seventeen businesses of Donald Trump, including the Trump Tower, the Trump leasing programs, all of these different programs, and including Trump himself and the various family members that had been wiretapped under these programs. There has been a wiretap on Trump for years…

…I produced 600 million pages. If you printed out each page it would be thirty miles high stacked one on top of another. The information is very sensitive information. They collected google searches, credit cards, phone records, images, pictures, anything and everything, and they did it for one reason: leverage. They didn’t know when, but they knew sooner or later they would need that information to use for leverage against a person … The amount of information is mind-boggling, and I gave all of that to FBI Director Comey’s office.

We know that President Trump was not the one with connections to Putin and Russia. Hillary Clinton, however, was deeply involved with Russia through her Uranium One and Port Canaveral Gulftainer scandals and the outrageous Steele dossier that she and her “progressive” comrades had paid for and put into play under the CIA’s and FBI’s “Operation Crossfire Hurricane” scheme.

Chinese military intelligence services operated a front company in Northern Virginia to hack into Clinton’s email server and forward to Chinese agents copies of every email, except for six, stored on Clinton’s illegal home server.

Two officials with the [Intelligence Community Inspector General] ICIG, investigator Frank Rucker and attorney Janette McMillan, met repeatedly with FBI officials to warn them of the Chinese intrusion. Among those FBI officials was Peter Strzok, who was then the bureau’s top counterintelligence official…Strzok didn’t act on the information the ICIG provided him, according to [Texas Republican Representative Louie] Gohmert.

A source briefed on the matter confirmed to Fox News the details of the Caller’s reporting, and said that the ICIG was so concerned by the revelation that officials drove over to the FBI to inform agents — including anti-Trump agent Peter Strzok — of the development after it was discovered via the emails’ metadata.

The source told Fox News the hack was from a Chinese company, describing it as a front for Chinese intelligence.

After one year of Secretary Hillary Clinton serving in office, while using her secret server to which Chinese military intelligence had access, China wiped out the CIA’s human intelligence assets in China.

The Chinese government effectively dismantled C.I.A. spying operations in the country starting in 2010, killing or imprisoning more than a dozen sources over two years and crippling intelligence gathering there for years afterward…

…All told, the Chinese killed or imprisoned 18 to 20 of the C.I.A.’s sources in China, according to two former senior American officials, effectively unraveling a network that had taken years to build.

Director Comey chose not to investigate Clinton’s illegal email server. “Regarding the handling of classified information, our judgement is that no reasonable prosecutor would bring such a case” “Comey explained during his infamous July 5, 2016 press conference regarding Clinton’s use of a private email server.

Comey told “New York Magazine ”I’d moved from Communist to whatever I am now. I’m not even sure how to characterize myself politically. Maybe at some point, I’ll have to figure it out.”

Referring to the situation as a “very serious Fourth Amendment issue, ”the FISA court revealed in April 2017 that the NSA, under President Obama, illegally spied on Americans

This destruction of evidence happened one month after General McInerney and the Whistleblower Tapes story revealed the illegal super surveillance system known as “The Hammer.”

‘There Has Been A Wiretap On Trump For Years’”

The problem for Brennan and Clapper and Comey and Baker and all of them now is, is that the FISA court has already communicated with the Justice Department about its findings. And their findings are that for more than four years before the election of Donald Trump, there was an illegal spying operation going on by FBI contractors, four of them, to steal personal information, electronic information about Americans, and to use it against the Republican Party.

. . . The Obama administration, for more than four years before the 2016 election, allowed four contractors working for the FBI to illegally surveil American citizens, illegally. The FISA court has already found that.

“Attorney General William Barr, defending his decision to order a review of the Trump-Russia probe’s origins, told a Senate panel Wednesday that he thinks “spying did occur” by the U.S. government on President Donald Trump’s 2016 campaign” NBC News reported on April 10, 2019.

Continuing, Barr told senators “I think spying is a good English word that, in fact, doesn’t have synonyms because it is the broadest word incorporating really all forms of covert intelligence collection, so I’m not going to back off the word ‘spying.’

“I think spying on a political campaign is a big deal — it’s a big deal,” Barr added.

Dennis Montgomery, under a limited immunity agreement, turns over to Comey’s FBI 47 hard drives that he says prove the existence of Brennan’s and Clapper’s super surveillance system.

1395
SHARES
VIEWS
FacebookTwitterGoogleReddit
© Newspaper WordPress Theme by TagDiv
error: Content is protected !!
Close
Do you already like us on Facebook?
Do not ask me again for Facebook
Continue to the article »
Go to mobile version