(1776 Channel) Did Gulftainer load a cargo ship at an Iraqi port with containers of cement to hide heavy rockets and other weapons already on board and headed to Gaza for attacks against Israel?

The Israel Defense Forces (IDF) tracked the shipment for weeks, finally intercepting the Panamanian-flagged KLOS-C in the Red Sea on March 5, 2014 during “Operation Full Disclosure.”

A U.N. report about the the weapons shipment remains classified, so confirming Gulftainer’s potential involvement with the illicit cargo is challenging.

The wealthy Jafar brothers, at the helm of the UAE family which owns and controls Gulftainer, are well connected at the U.N.

Badr Jafar, CEO of Crescent Enterprises, parent company of Gulftainer, launched the Pearl Initiative at the UN in 2010.

The weapons shipment began in Syria, according to IDF reports.

The M-302 rockets were packed in wood crates, and flown via cargo plane from Damascus, Syria, to Tehran, Iran.

From Tehran, the weapons were moved by land to Iran’s Persian Gulf port of Bandar-Abbas. The weapons crates, along with cement bags marked “Made in Iran,” were placed inside intermodal containers marked with bold painted white stripes.

The white-striped containers with the weapons were then loaded onto the KLOS-C in Bandar-Abbas, Iran. The IDF maintains that the Turkish captain of the ship and the rest of the crew were not aware that there were weapons inside the containers.

The KLOS-C departed Bandar-Abbas, Iran with weapons on board and headed for Umm Qasar Port in Iraq.

The KLOS-C spent several days docked at Umm Qasr Port, and additional containers, loaded with cement, were placed on board.

It is difficult to confirm if Gulftainer loaded the KLOS-C at Umm Qasr port, but it is known that Gulftainer operated two container terminals at Umm Qasr.

The KLOS-C was carrying 40 “powerful M-302 rockets capable of striking almost any point in Israel, including Jerusalem and Tel Aviv…181 mortar shells and approximately 400,000 7.62 caliber rounds” of ammunition, according to IDF’s official blog.

“Such bullets are frequently used in Kalashnikovs, a common weapon for Hamas policemen in Gaza. Kalashnikovs, alternatively known as AK-47s, were also used by the militants who launched a cross-border attack on Israel from Sinai in August 2011” reported the Christian Science Monitor.

“Although 100 of the 150 containers were transferred from Iran to Iraq, the shipment’s loading form was modified to make it appear as if the shipment came from Iraq directly. It is clear that Iran was trying to hide its involvement in any form.” stated the IDF blog. 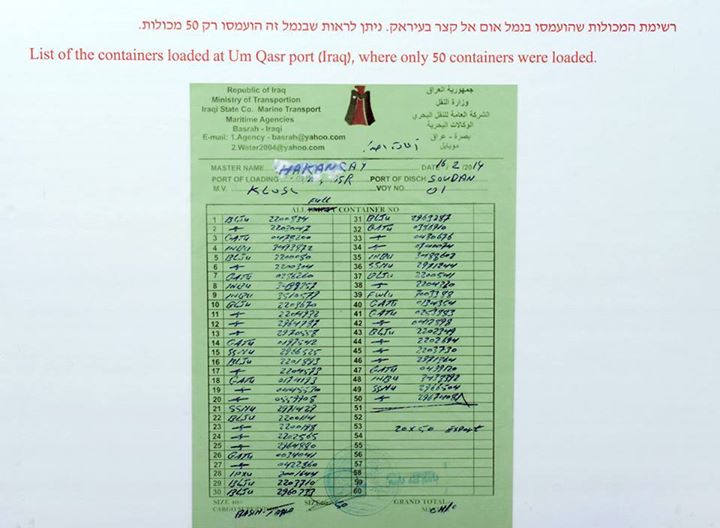 The IDF’s assertion that the “loading form was modified” suggests that the terminal operator at Umm Qasr Port used container-lifting cranes to arrange the containers aboard the KLOS-C in such a way that the weapons would be difficult to find. That scenario increases the likelihood that the terminal operator in Iraq was not only aware of, but also a co-conspirator with Iran in the illegal weapons smuggling operation.

Umm Qasr Port in Iraq appears to be a wild and loosely-regulated port.

“Into Umm Qasr comes “anything you can think of that you would go down to the store to buy,” said Army Maj. Sean Tyson, who works with Iraqi border officials in Basra.

In also comes anything that a person could think to smuggle, Army officers acknowledge, and no one has any idea how much illegal trade in weapons, drugs and people are coming through the ports or other border areas in southern Iraq…
…Now Umm Qasr has a more legitimate harbor and a bureaucratic mess, said Lt. Col. William Benson, commander of the 1st Squadron, 10th Cavalry Regiment.

Nineteen Iraqi agencies claim some part in securing and running Umm Qasr with no clear leader in charge, Benson said.”. – Stars and Stripes, May 28, 2009

The U.N.Security Council’s Panel of Experts on Iran issued the report, which has been obtained by Reuters.

“The U.N. experts reached their conclusion after investigating the case and inspecting the seized cargo and documentation related to the shipment, which traveled from the Iranian port of Bandar Abbas to the Iraqi port of Umm Qasr, and from there in the direction of Port Sudan.” (emphasis added) – Exclusive: U.N. experts trace recent seized arms to Iran, violating embargo, Louis Charbonneau, United Nations bureau chief, Reuters

The U.N. also disputes Israel’s claim that the weapons were bound for Gaza, instead suggesting that the final destination was Sudan.

An unnamed source told 1776 Channel that “the defense establishment is unhappy” about the deal between Gulftainer and Port Canaveral.

The cement bags in the IDF video indicate the cement was manufactured in Iran. Hamas has been building cement tunnels to smuggle rockets and other weapons.

Gulftainer is building their Port Canaveral terminal next door to the Cemex cement terminal.