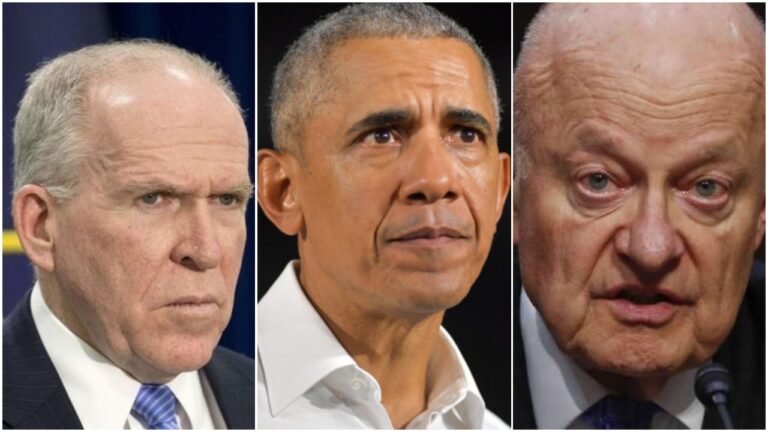 CIA contractor-turned whistleblower Dennis Montgomery asserts that “THE HAMMER,” a super surveillance system he designed and built as a foreign surveillance tool to spy on terrorists and other foreign adversaries, was commandeered by John Brennan and James Clapper to unlawfully wiretap Michael Flynn and Donald Trump.

Assistant U.S. Attorney Curtis, assisted by FBI Special Agents William Barnett and Walter Giardina, debriefed Montgomery inside of a Secure Sensitive Compartmented Information Facility (SCIF) at the FBI Washington DC Field Office on December 3, 2015 for three and a half hours, according to CIA/FBI contractor-turned-whistleblower Montgomery.

Montgomery asserts that during that debriefing he testified under oath before Curtis and FBI agents Barnett and Giardina, while being videotaped, that Brennan and Clapper had turned the foreign surveillance tool “THE HAMMER” against the Obama administration’s political enemies, including Michael Flynn and Donald Trump.

As lead attorney for the prosecution, Curtis would be legally and ethically obligated to provide that information to Flynn’s defense team, led by attorney Sidney Powell.

It remains unclear whether the surveillance system referenced by The Wall Street Journal is the onetime foreign surveillance tool “THE HAMMER” that Montgomery says Brennan and Clapper had commandeered, or another surveillance program.

Montgomery asserts that Robert Mueller’s FBI provided computers for “THE HAMMER” and that surveillance data collected by “THE HAMMER” was transmitted to the FBI.

Former FBI General Counsel James Baker amended his own testimony before Members of Congress during a closed-door session last year, and admitted that the FBI received evidence from Montgomery that proves, according to Montgomery, that U.S. government officials unlawfully spied on Americans, including other government officials.

The intelligence community disclosed Tuesday that the Foreign Intelligence Surveillance Court last year found that the FBI’s pursuit of data about Americans ensnared in a warrantless internet-surveillance program intended to target foreign suspects may have violated the law authorizing the program, as well as the Constitution’s Fourth Amendment protections against unreasonable searches.

On August 19, 2015, under an immunity deal struck between U.S. Assistant  Attorney Deborah Curtis with whistleblower Dennis L Montgomery, Montgomery turned over to now-fired Director James Comey’s FBI Miami Field Office 47 computer hard drives of evidence. The 600 million documents of evidence stored on those hard drives, when placed one atop another, would measure as astronomical thirty miles high. Montgomery asserts that the hard drives he provided to FBI officials, including Comey and Baker, include proof that Brennan and Clapper illegally spied on General Flynn and Donald Trump.

CNN anchor Jim Sciutto recently asked Clapper whether he was worried that the Trump administration’s investigation into the origins of the FBI’s Russian Collusion investigation, an international international investigation currently being conducted by Attorney General Barr and U.S. Attorney John Durham, will discover any wrongdoing on the part of Brennan and Clapper, Clapper responded:

I know, for my part, my main concern was with the Russians and the threat posed by the Russians to our very political fabric and uhhhh, the message I’m getting from all of this is apparently what we were supposed to have done was to ignore the Russian interference, ignore the Russian meddling and the threat that it poses to us, and oh, by the way, blown off what the then commander-in-chief, President Obama, told us to do, which was to assemble all of the reporting we could, that we had available to us.

According to whistleblower Dennis Montgomery, under the Obama administration, John Brennan and James Clapper were running the illegal domestic surveillance system known as “THE HAMMER.”

27
SHARES
VIEWS
FacebookTwitterGoogleReddit
© Newspaper WordPress Theme by TagDiv
error: Content is protected !!
Close
Do you already like us on Facebook?
Do not ask me again for Facebook
Continue to the article »
Go to mobile version