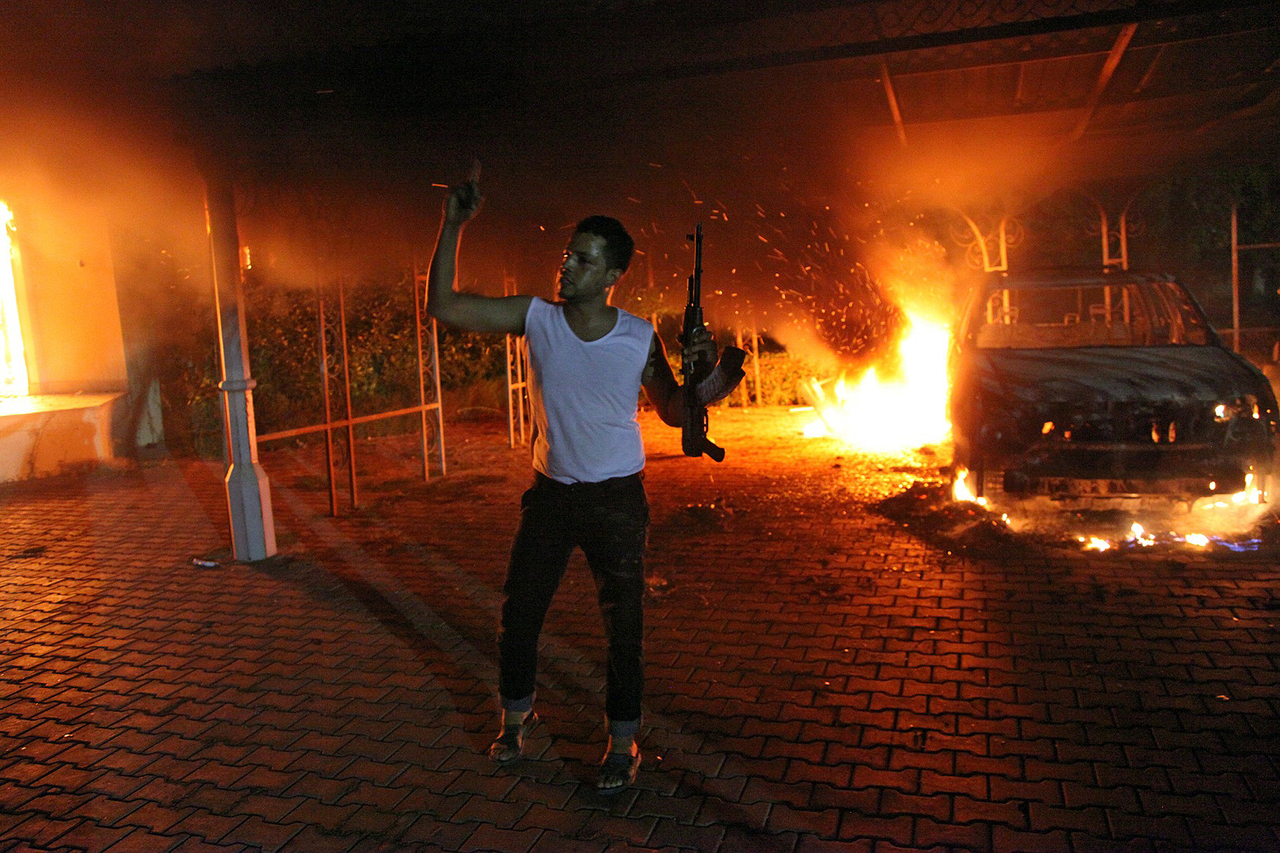 New information regarding the September 11, 2012 attacks on the U.S. diplomatic outpost and CIA annex in Benghazi, Libya and on the U.S. Embassy in Cairo, Egypt has been brought forward by former U.S. military personnel who were on duty that fateful night.

These whistleblowers reveal that the attackers in Benghazi were led by the Iranian Revolutionary Guard Corps Quds Force, under the command of Iranian General Qassem Suleimani.

“Qassem Suleimani, a fanatical Islamic revolutionary, has rapidly become one of the world’s top terrorist suspects, as well as a powerful and sinister force within Iran” according to The Telegraph.

U.S. officials knew that the Quds Force was coordinating and leading the attacks in Benghazi.

U.S. military forces were ordered not to track or to pursue the Benghazi attackers, whistleblowers confirmed.

According to Kenneth R. Timmerman, the Benghazi attack was funded with hard cash in the form of Euros smuggled into Libya from Malaysia for the Iranian Quds Force.

The human intelligence (HUMINT) warnings began on June 2, 2012, steadily became more serious, and started coming in via much higher-level sources.

By September 1, 2012, the warnings were severe enough to warrant removing all key personnel from the areas affected, the most threatened area being Benghazi. All classified or sensitive information, equipment, and personnel of key positions, under policy, were supposed to be moved to a more secure location.

On the night of the attacks, at least 35 Americans were still stationed at the State Department and CIA facilities in Benghazi.

Inexplicably, security was lessened in the areas that were targeted, even after multiple requests to increase security. On or about May 9, 2012, even more security personnel were removed for unknown reasons.

On September 11, 2012, when the attacks began in Benghazi, CENTCOM was conducting a training exercise known as Internal Look 12 (IL 12).

CENTCOM did not stop the training event until eight hours after the attacks began. During the attacks, no one was allowed to stop training in order to engage the attacking terrorists.

At AFRICOM, they contacted every intelligence agency. They called the watch desk. They notified the U.S. Navy 6th Fleet. They reached out to Joint Operations Command (JOC).  The commanding officer at AFRICOM told them they could do nothing.

U.S. military aircraft, ships, pararescue teams, and special operators were ordered not to respond, according to whistleblowers who were on duty at CENTCOM and AFRICOM during the attacks in Benghazi.

A Combat Search and Rescue (CSAR) pararescue team was on 24-7 standby at AFRICOM’s Camp Lemonnier in Djibouti, a small African nation north of Somalia.

The whistleblowers say that the airspace over North Africa was wide open, with no air traffic that would impede rescue flights.

At Spangdahlem Air Base in Germany, it was “Wheels Up.” Rescue teams were ready to go. Others were notified and on alert at Aviano Air Base and Naval Air Station Sigonella in Italy, should they need refueling.

Yet, all were told to stand down.

Fox News reported on May 12, 2016, that a squadron member from Aviano Air Base who “asked that his identity be protected for fear of retribution . . . said that a team was ready to go that night to help protect Americans under fire in Benghazi:”

His squadron got the alert: a “real world mission was going down.”

The team – at Aviano Air Base in northeastern Italy – raced to the field and was briefed, as planes were armed and prepared to launch. Hundreds of miles away, fellow Americans were under attack in Benghazi.

“There were people everywhere,” said the witness, who was on the ground that night but wished to remain anonymous. “That flight line was full of people, and we were all ready to go” to Benghazi.

Only they were waiting for the order. It never came.

“The whole night we were told that we are waiting on a call,” he told Fox News. . .

. . . The source said: “I definitely believe that our aircraft could have taken off and gotten there in a timely manner, maybe three hours at the most, in order to at least stop that second mortar attack … and basically save lives that day.”

Former Navy SEALs Tyrone Woods and Glen Doherty were killed in that second wave. Ambassador Chris Stevens and information officer Sean Smith were killed in the initial attack on the main compound.

“We could have been there. That’s the worst part,” the source said.

The source who spoke with Fox News challenged the military claim that a re-fueling tanker wasn’t available. He said American jets routinely refuel by using what’s called a “hot pit maneuver,” which allows the jets to land and then get fuel without shutting off the engines. . .

. . . The same frustrations have compelled Mike, a former team sergeant for a military anti-terror quick reaction force, once known as the CIF, to talk.

“For some reason they were all shut down, and I think it leads back to a policymaker somewhere because nobody in the military is going to shut down an operation,” he said. On the night of the attack, Mike was at Delta Force headquarters in the U.S. monitoring the events as they happened.

. . . Mike echoed that: “I know everything was spun up and nothing was done.”

He added: “At our level, we were doing everything we were supposed to be doing. At everybody else’s level above us, it was political.”

During the attacks on Benghazi, there were U.S. ships off the coast of Libya, fast movers in the air, and forces on the ground that were told to stand down.

There was also Special Ops in the air that were turned around. The whistleblowers were advised the State Department (DOS) had it under control.

British and French forces in the region, including a French warship, offered assistance in responding to the attack in Benghazi.

All offers of assistance from allied forces were rejected, the whistleblowers relay.

One of the whistleblowers noted that the Defense Department’s GLOBAL COMMAND AND CONTROL SUPPORT (GCCS) system would have retained records of all available military assets in the region that could have launched rescue operations.

Of interest is the terrorist who was filmed running into the Benghazi mission yelling to his fellow terrorists “Don’t shoot, Don’t shoot. Dr. Morsi sent us.” The U.S. Embassy in Cairo was also under attack on September 11, 2012.

The same night that U.S. Ambassador to Libya Christopher Stevens and three other Americans were killed in Benghazi, the U.S. embassy in Cairo was also under assault by 2,500 enraged local nationals led by the Muslim Brotherhood.

Two of the whistleblowers revealed that U.S. Marines guarding the U.S. Embassy in Cairo were ordered to lock up their weapons in the arms room while the angry mob outside the embassy was protesting and burning the American flag.

At least six protesters from the mob got over the wall and inside the embassy compound. The U.S. embassy in Cairo is sovereign U.S. territory.

At the same time that the Marine Security Guards protecting the U.S. Embassy in Cairo were ordered to lock up their weapons in the arms room, further instructions came that directed the U.S. Marines to surrender the embassy to Mohamed Morsi’s Muslim Brotherhood government.

Anne Patterson, U.S. Ambassador to Egypt, was safe and sound in Washington D.C. during the Cairo embassy siege.

General Ham testified on June 26, 2013, before the House Armed Services Subcommittee on Oversight and Investigation, that moments after the Benghazi attacks began, he alerted Secretary of Defense Leon Panetta and Chairman of the Joint Chiefs of Staff Martin Dempsey.

Secretary Panetta testified during a February 7, 2013, Senate Armed Services Committee hearing on the Defense Department’s response to the Benghazi attack:

There was no specific intelligence or indication of imminent attack on the U.S. facilities in Benghazi. And, frankly, without an adequate warning, there was not enough time given the speed of the attacks for armed military assets to respond.

The United States military, as I’ve said, is not and, frankly, should not be a 911 service capable of arriving on the scene within minutes to every possible contingency around the world.

There’s some places on the planet where we have some gaps and I think North Africa’s probably one of them.

The whistleblowers’ statements stand in stark contrast to the statements of Secretary Panetta and General Dempsey. Resources and military assets were readily available.

Multiple attacks on Western embassies had already taken place. Dempsey and Panetta had every reason to be on high alert as they had been forewarned by recent events.

The September 11 attacks in Benghazi and at the U.S. Embassy in Cairo were the continuation of an already-established pattern:

These subsequent attacks should not have been unexpected or come as a surprise:

The mob that forced its way into the main embassy enclosure and a second British compound in north Tehran included many members of the Basij militia which is linked to Iran’s Islamic Revolutionary Guard Corps (IRGC). Some of the protesters held aloft pictures of Qassem Suleimani, the head of the IRGC external wing, the Quds force.

U.S. military personnel were told that they could not rescue their fellow Americans.

Permanently etched in the minds and souls of the whistleblowers is the betrayal of their fellow Americans by the Obama administration.

Desperate calls for help went unanswered. For those whistleblowers who were ordered not to launch a rescue mission, waiting for accountability has felt like an eternity.