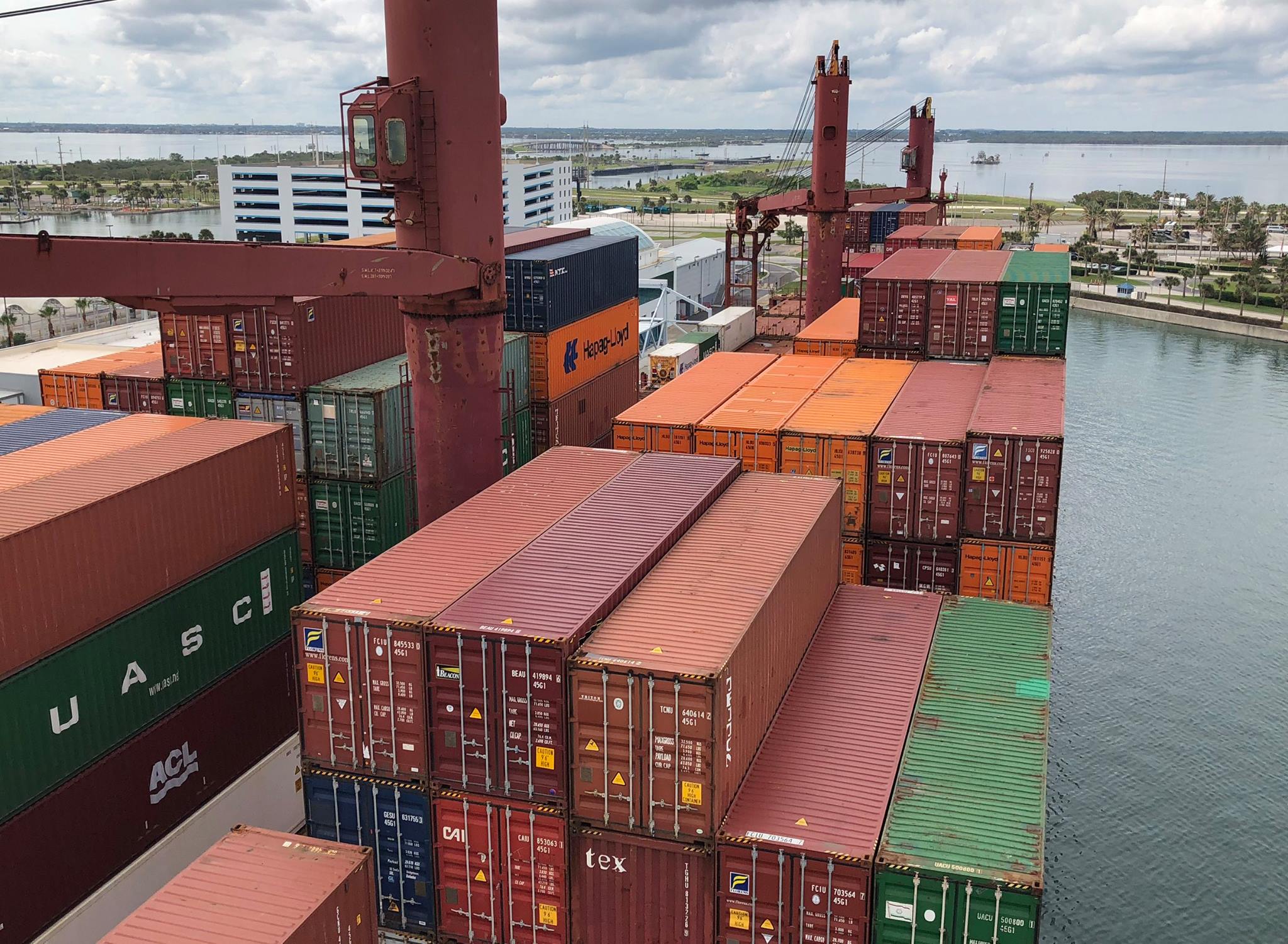 Gulftainer is connected to the Uranium One deal.

Jafars partner With Russia’s Inter RAO UES,  a subsidiary of Rosatom, majority owner of Uranium One

At that time, Inter RAO UES was a subsidiary of Russia’s Rosatom State Atomic Energy Corporation. Rosatom is the Russian company that purchased Uranium One.

The Russian government’s military industrial complex, petroleum industry, electrical power grid, nuclear energy sector, and nuclear weapons complex, are all components of a giant web of state-controlled enterprises. Their business structures may routinely shift like the sand dunes in a desert, but these key sectors always remain under the control of Vladimir Putin and the Kremlin.

Rosatom purchased Canadian mining company Uranium One in a deal that transferred control of one-fifth of U.S. uranium reserves, a strategic national security commodity critical to U.S. nuclear defense, into the hands of Russia and Vladimir Putin.

Inter RAO UES is chaired by Igor Sechin who at the time of the Crescent Investment deal was Russia’s Deputy Prime Minister and the head of Russia’s petroleum giant Rosneft.

Rosneft is a Russian state-owned enterprise in business with Crescent Petroleum, another Gulftainer affiliate.

Forbes reported in January 2018 that Sechin, known as “the Darth Vader of Russia, is ”more powerful than Russian prime minister Dmitry Medvedev,” “more powerful than Vladimir Putin” and “feared more than Putin.”

The management of Inter RAO UES, Uranium One, and Uranium One’s majority owner Rosatom, has been a revolving door.  Management moves among these three Russian companies freely and frequently.

Boris Kovalchuk is Chairman of the Management Board, Inter RAO. “In 2009, he (Kovalchuk) was Deputy Director General for Development of the State Atomic Energy Corporation Rosatom” according to Inter RAO’s 2015 Annual Report.  Rosatom’s acquisition of Uranium One was well underway in 2009.

The Pentagon placed Dr. Jafar on CENTCOM’s “Blacklist” in 2003, designating Jafar as a senior Saddam regime official enemy combatant who was wanted for capture and could be legitimately targeted by U.S. and coalition military forces.

To the surprise of UN weapons inspector David Kay, Dr. Jafar was able to draw detailed diagrams from memory showing exactly how to build a nuclear weapon.

Dr. Jafar stated “You can bomb our buildings. You can destroy our technology. But you cannot take it out of our heads. We now have the capability.”

North Korea’s Kim Jong Un was seen in 2017 on North Korean television with a what appeared to be a miniaturized nuclear weapon strikingly similar to Dr. Jafar’s “Beach Ball.”  Dr. Jafar and Kim Jong Un’s father’s regime worked in concert for a delivery system for a North Korean ballistic missile production line to be built in Iraq.

Dr. Jafar has taken the lead in Crescent’s partnership with Inter RAO, working with the Russians on new power plant projects in the Middle East. According to Dr. Jafar’s nephew Badr Jafar:

“Looking at opportunities within Russia itself, the other main subsidiary of the Crescent Group, Crescent Enterprises, owns a company called Gulftainer, which today is the largest privately owned port operator in the world in terms of operated volumes. Gulftainer is looking to expand its geographic footprint by investing in Russia’s underdeveloped Ports and Logistics sector, specifically the management of container terminals, logistics partnerships, and inland depots. Another one of Crescent Enterprises’ subsidiaries, URUK Power, is active in the power sector and is looking at power opportunities alongside Inter RAO UES, one of Russia’s largest energy companies.” – Badr Jafar, CEO of Crescent Enterprises and President of Crescent Petroleum – Leaders Magazine interview – October 4, 2013

Port Canaveral is the nexus of critical military and space infrastructure

The Club-K is designed to look identical to standard cargo containers.  The Club-K allows Russia and her rogue regime allies stealth access to the United States.  The Club-K bypasses early-warning systems by launching Russian Kalibr cruise missiles armed with nuclear, EMP, or conventional warheads from cargo ships off U.S. shores or from trains, trucks, and riverine boats inside every hamlet in America.

These Russian cruise missiles are capable of flying at supersonic speeds beneath U.S. early-warning radar systems from Trojan Horse  “cargo containers,” simultaneously travelling toward multiple cities or other satellite-guided coordinates across the United States.

The Jafars entered into their joint venture with Rostec in 2010.

Why was this dire threat ignored by the Obama administration officials who helped Gulftainer secure a lease at Port Canaveral and bypass the required National Security Threat Analysis?

That National Security Threat Analysis, which includes input from sixteen U.S. intelligence agencies, was bypassed by the Obama administration.

That review would have revealed that the Jafars were at the center of Saddam Hussein’s uranium enrichment and nuclear weapons programs.

The mandated CFIUS review would have also revealed that the Jafars had partnered with Russian state-owned companies behind the Uranium One deal.

That CFIUS review would also have shown that the Jafars are inextricably intertwined with the Russian companies behind the production of Russian nuclear weapons, and are behind the export of the Club-K container cruise missile launch system — all Russian military-industrial weapons programs that could be used in a surprise attack against America using cruise missiles launched from “cargo containers.”

Bill and Hillary Clinton and the Clinton Foundation are tied to both Gulftainer’s “Project Pelican” deal and to the Uranium One deal.

Hillary Clinton’s State Department was one of eight agencies to review and sign off on the sale of U.S. uranium to Russia. However, the then-Secretary of State Clinton was the only agency head whose family foundation received $145 million in donations from multiple people connected to the uranium deal, as reported by the New York Times.

The Varkey GEMS Foundation has helped to facilitate more than 2,300 commitments through the Clinton Global Initiative to date. Upon funding and implementation, these commitments will have a total value of over $70 billion. 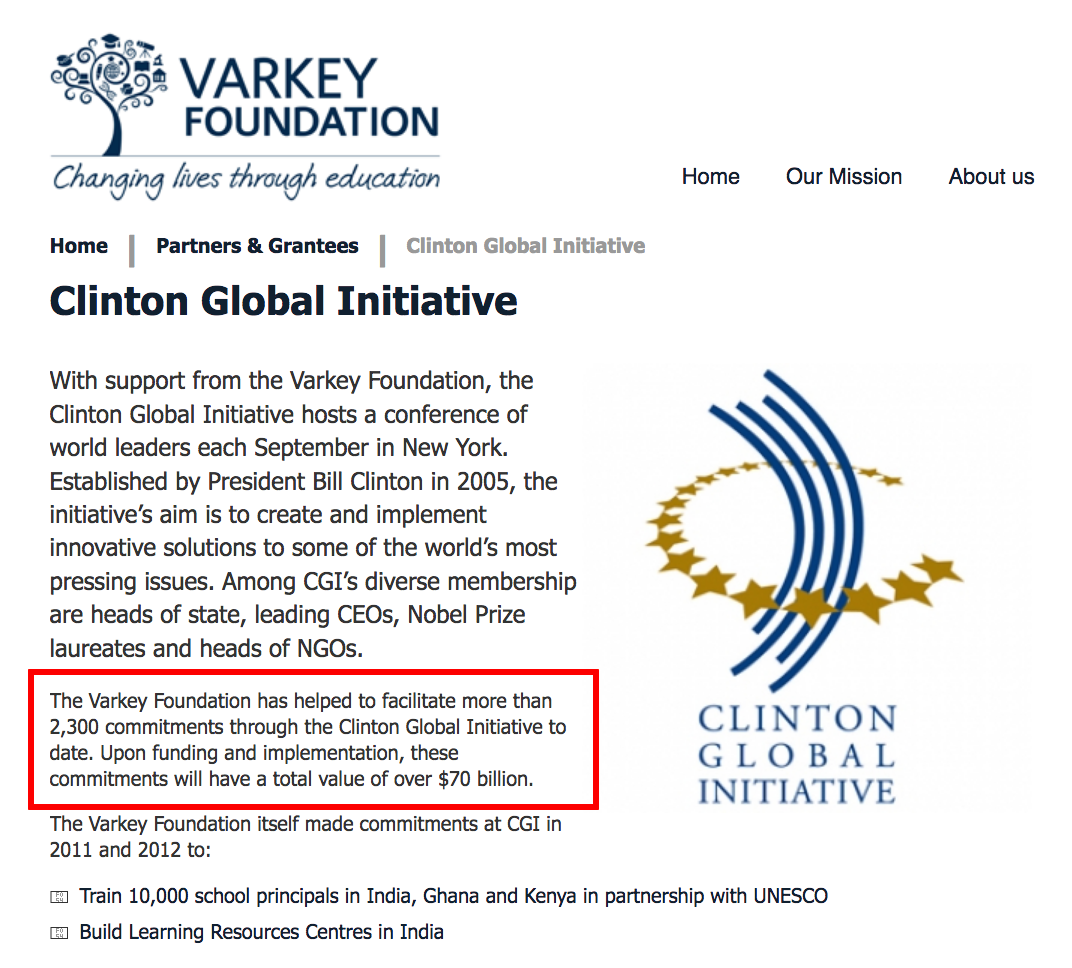 The “Wall Street Journal” reported on February 2, 2018 that The Bill and Melinda Gates Foundation, The World Bank International FInance Corporation (IFC), and two other institutional investors asked The Abraaj Group for bank statements to determine what happened to hundreds of millions of dollars sent to Abraaj’s $1 billion health care fund that were earmarked for construction of hospitals and medical clinics in Pakistan, India, Nigeria, and Kenya. After The Abraaj Group refused to turn over bank statements, the investors retained auditing firm Ankura Consulting Group to conduct a forensic trace on the money.

As a Founding Shareholder and Limited Partner of Abraaj, Crescent Enterprises monitors the performance of all invested funds, and takes a keen interest in the strategic rationale employed by Abraaj on select investment decisions, including review of coinvestment opportunities whenever possible. Crescent Enterprises also provides strategic guidance by means of representation on Abraaj’s Board of Directors.

Wahid Hamid, a former Pakistani foreign student who attended Occidental College with Barack Obama, and remains very close to the former president, is a Managing Partner of The Abraaj Group. Wahid Hamid travelled with Barack Obama during his mysterious 1981 trip to Pakistan.

As previously reported in 2016 by The American Report and 1776 Channel:

Weeks before co-sponsoring the 2012 Clinton Global Initiative meeting, The Abraaj Group was awarded the first of hundreds of millions of dollars in loans and investment management contracts through the State Department’s Overseas Private Investment Corporation (OPIC), a federal agency overseen by Secretary of State Hillary Clinton.

The Washington Free Beacon reported in 2016 that The Abraaj Group donated between $500,000 and $1 million to the Clinton Foundation around the same time the private equity firm received OPIC funds management contracts and loans through the State Department.

Authorities in Sindh province (Pakistan) have accused a prominent government official of providing illegal favors to K-Electric, a power company owned and managed by the Abraaj Group since 2009.

Former Pakistani oil minister Dr. Asim Hussain was arrested last year amid allegations that he helped harbor terrorists in a string of hospitals he owned and doled out illegal contracts to companies, including K-Electric. Both Hussain and K-Electric have denied the allegations.

This jaw-droppingly stunning breach of U.S national security by the Obama administration — placing Gulftainer “inside the wire” at Port Canaveral at a U.S. defense and space nerve center, with a cargo container terminal lease, while knowing about Gulftainer’s joint venture with Russia’s exporter of an advanced weapons system — is well beyond “boneheaded.”

Considering that (i)  Dr. Jafar was successful in designing Saddam’s uranium enrichment programs and miniaturized nuclear weapons (“Beach Ball”), (ii) Hamid Jafar funded Saddam’s nuclear weapons programs, (iii) CENTCOM declared Dr. Jafar an enemy of the United States, (iv) the Jafars partnered with the Russian state-owned companies behind the Uranium One deal, and (v) the Jafars partnered with the Russian company that exports the stealth Club-K weapons launching system — the Obama administration has a lot of explaining to do.

As our FBI used to say….”There are no coincidences.”