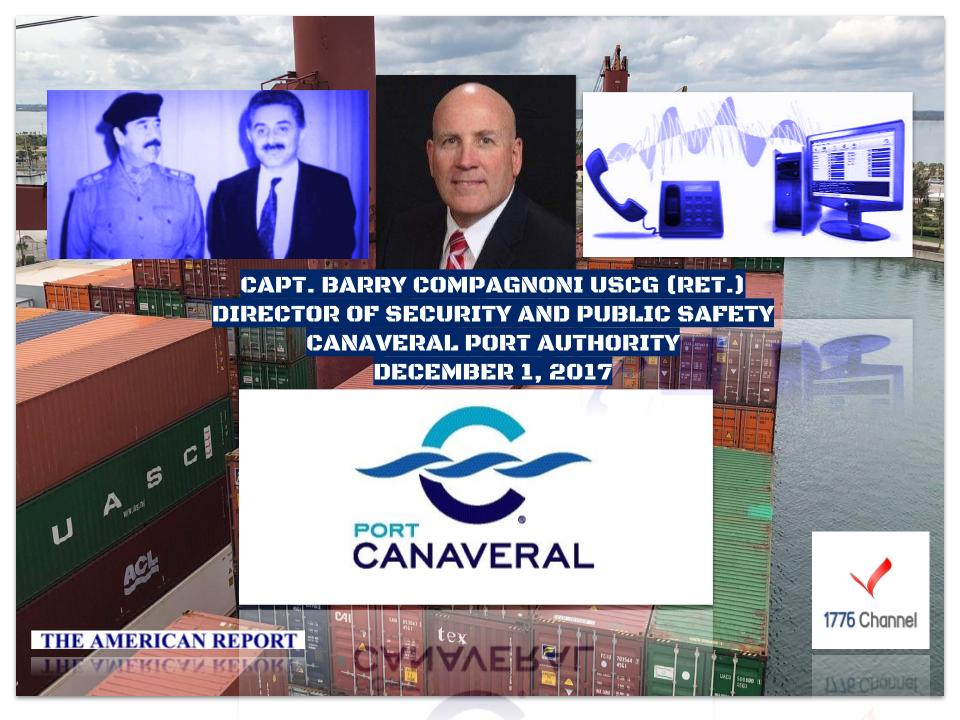 It was a quick and abrupt end to a call placed to Director Compagnoni’s office on December 1st in an attempt to gauge Port Canaveral’s security posture toward Saddam Hussein’s rogue Iraqi nuclear weapons physicist Dr. Jafar Dhia Jafar.

Dr. Jafar and his family’s ports company Gulftainer were placed ‘inside the wire’ at Port Canaveral with a 35-year lease approved and awarded by the Obama administration in a secretly-negotiated deal code-named ‘Project Pelican.’

Dr. Jafar and his brother Hamid Jafar, another Iraqi closely connected to Saddam Hussein’s WMD programs, are executives at UAE-based The Crescent Group, the parent company of Gulftainer and the Jafars’ newly-concocted downstream company GT USA.

Gulftainer entered into a joint venture with Rostec, the Russian state-owned weapons conglomerate that exports the Club-K, a cruise missile launch system disguised as a standard intermodal shipping container. The Club-K can wipe out an aircraft carrier and can even deliver nuclear weapons.

The Club-K container missile system has reportedly been exported to Iran. The Jafars’ former Crescent Petroleum Director of Strategic Planning Siamak Namazi is a former Iranian army and regime official closely tied to the Iran nuclear deal. The Jafars scrubbed their company’s websites of all references to Crescent’s Tehran office shortly before obtaining the Port Canaveral lease.

Other senior WMD commanders were wanted by the United States and placed on the Blacklist (including President Saddam Hussein and the head of the Iraqi Special Security Organization (SSO), the elite intelligence unit that moved and hid Dr. Jafar’s nuclear bomb components using refrigerated cargo containers).

Dr. Jafar is the former Iraqi Deputy Defense Minister under Saddam Hussein who is widely known as the “father of Iraq’s nuclear weapons program.”

Dr. Jafar headed a team of 20,000 technicians and scientists working on Iraq’s own top-secret ‘Manhattan Project,’ a workforce equal in size to that of the CIA.

“How can we not have known this any earlier? We do not tolerate illegal behaviour.” — Appleby offshore banking law firm

Bermuda-based Appleby became the focus of the Paradise Papers after millions of Appleby documents were leaked in a case similar to the Panama Papers.

Appleby reacted with anger after figuring out in 2013 that Hamid Jafar had been a client for almost thirty years while hiding from the controversial law firm his connections to Saddam Hussein and to his brother, WMD nuclear physicist Dr. Jafar, according to new report in “Süddeutsche Zeitung,” Germany’s largest daily newspaper.

“Süddeutsche Zeitung” revealed in a November 2, 2017 feature piece about Appleby, titled “The Firm”:

One particularly remarkable case is that of the Iraqi Abdul Hamid Dhia Jafar, the owner of the Crescent Petroleum oil company and an Appleby client since 1984. Despite persistent rumors about Jafar’s proximity to Iraqi dictator Saddam Hussein, Appleby first noticed in 2013 just how close his ties to the former regime had been – he is the brother of the man who had once led Hussein’s nuclear weapons program. “We have had this relationship for some time now”, one Appleby lawyer wrote angrily, “How can we not have known this any earlier?” Appleby recently wrote on its website: “We do not tolerate illegal behaviour. It is true that we are not infallible. Where we find that mistakes have happened we act quickly to put things right.”…former Appleby compliance manager Alhassan said there was only so much an offshore services provider could do to ensure criminals were not abusing the system. “It’s not the FBI.”

Investigative journalists Shyam Bhatia and Daniel McGrory revealed in their book “Brighter than the Baghdad Sun: Saddam Hussein’s Nuclear Threat to the United States” that Dr. Jafar had developed a miniaturized nuclear weapon referred to as ‘Beach Ball.’ ‘Beach Ball’ was the end product of Saddam’s ‘Crash Program’ to create a miniaturized nuclear weapon that could be delivered on a Scud missile.

Dr. Jafar and Saddam Hussein worked closely over a span of decades with Russia’s KGB spymaster Yevgeny Primakov, known as the ‘Bear in the Desert.’  Primakov was sent by the Kremlin to the Middle East to radicalize Islam in order to foment terrorism toward the United States and Israel.

Between 2001 and 2003, in the aftermath of the 9/11 attacks, Dr. Jafar was working with North Korea to obtain a domestically-produced delivery system for his miniaturized nuclear weapon. North Korea was planning to build a Rodong medium-range ballistic missile plant in Iraq but the project was waylaid by the Iraq War.

In 2017 North Korean leader Kim Jong-un appeared on North Korea television with what appears to be a miniaturized nuclear weapon bearing a striking resemblance to Dr. Jafar’s ‘Beach Ball’ design. 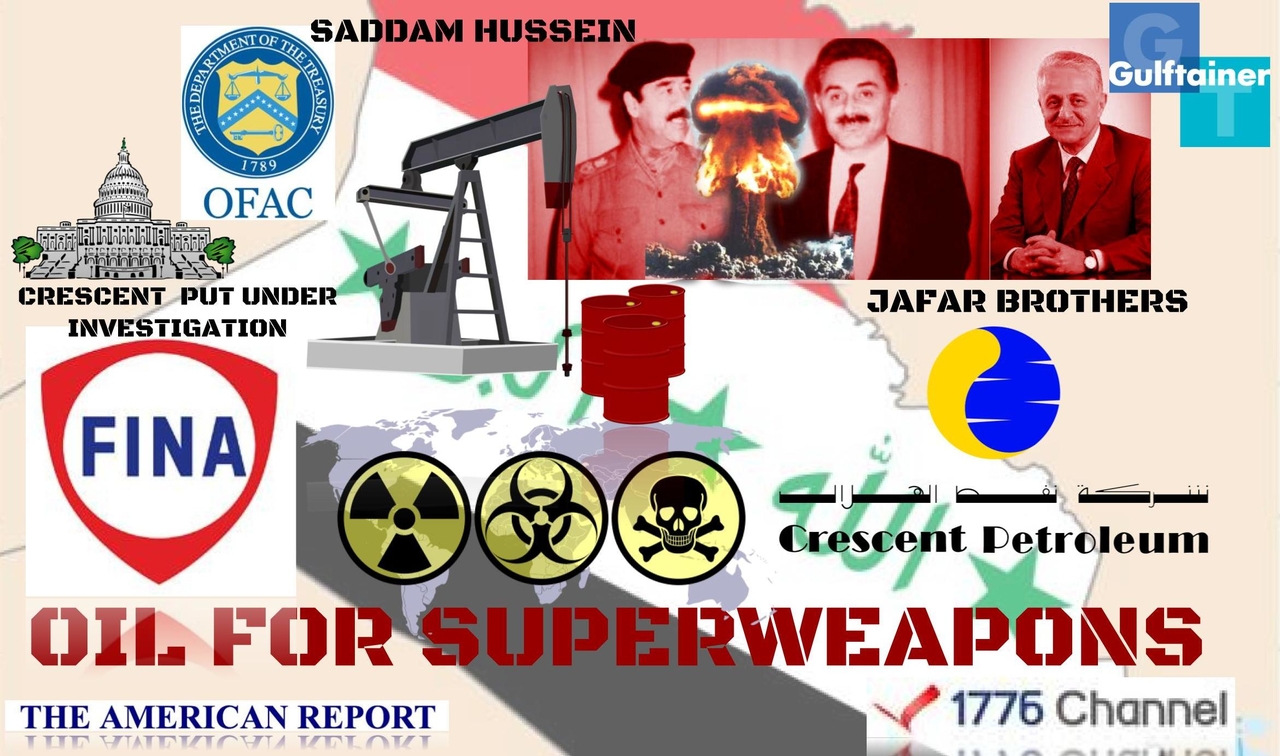 Hamid Jafar was under investigation by the Treasury Department and several congressional committees for his ‘Oil For Superweapons’ scheme to illegally sell Iraqi Oil in violation of sanctions to fund Saddam Hussein’s and Dr. Jafar’s secret nuclear weapons program. This operation to sell Iraqi oil to unsuspecting American motorists through FINA service stations to fund Dr. Jafar’s nuclear weapons factories became known as ‘Put A Tyrant In Your Tank.’

Barack Obama’s Pakistani foreign student college friend Wahid Hamid, with whom Obama traveled during a mysterious 1981 trip to Pakistan, is now a Managing Partner of The Abraaj Group.

An email released by Wikileaks in 2016 reveals that The Abraaj Group donated over half a million dollars to the Clinton Global Initiative. The payment to Bill and Hillary Clinton’s charity was made in September 2012, coinciding with Gulftainer’s initiation of secret ‘Project Pelican’ negotiations with Port Canaveral.

Only a few months earlier, in June 2012, Port Jacksonville turned down a $250 million offer from Gulftainer to become a ‘silent partner’ in the operation of a cargo container terminal at Port Jacksonville. Port Jacksonville is located in very close proximity to Naval Submarine Base Kings Bay in Georgia.  Kings Bay is home to the U.S. Navy’s Atlantic Fleet of ballistic missile nuclear submarines, often referred to as ‘boomers,’ equipped with Trident missile nuclear weapons. Atlantic Fleet submarines also routinely dock at Naval Facility Port Canaveral.

Badr Jafar, Executive Chairman of the Gulftainer Board of Directors and a member of The Abraaj Group board of directors, visited the Obama White House in March 2014, six weeks before the secret Port Canaveral Gulftainer deal was announced and signed, according to White House visitor logs. Badr Jafar travelled to the United States to preside over the Port Canaveral signing ceremony in June 2014.

The Club-K is a modular advanced weapons system hidden in standard intermodal containers. Club-K units can be moved undetected, amid millions of other containers, aboard semi-trucks, rail cars, ships, and even small riverine boats.

The Club-K gives America’s adversaries the ability to pre-position cruise missiles armed with conventional or nonconventional warheads in every hamlet in America.  The Club-K provides Russia and her radical Islamic and communist client states with an asymmetrical military advantage of which the Soviet Union’s Cold War missile commanders could have only dreamed.

The Club-K is directed via satellite and once in place has a shelf life of ten years.

Dr. Peter Vincent Pry, the foremost authority on electromagnetic pulse (EMP) weapons, has described the Club-K as “a game changer.”

The Obama administration bypassed the Committee of Foreign Investment in the United States (CFIUS) process that had been specifically put in place under the Foreign Investment National Security Act of 2007 (FINSA) in order to prevent a repeat of the 2006 Dubai Ports World (DPW) debacle.

Project Pelican bypassed Florida’s Sunshine Law that mandates an open bidding process, which prevented any American companies from competing for the Port Canaveral cargo container terminal lease. The outcome was a secret handover of a major U.S. port to foreigners connected to Iraqi WMDs through a treacherous backroom deal exponentially more catastrophic than Uranium One.

Project Pelican bypassed the 30-day and 45-day CFIUS national security reviews by the sixteen U.S. intelligence agencies and the Director of National Intelligence (DNI). The DNI during the Project Pelican deal was James R. Clapper.

Port Canaveral is considered critical military infrastructure, yet the Committee on Foreign Investment in the United States (CFIUS) refused to conduct the mandatory 30-day review and the 45-day National Security Threat Assessment, despite the fact that a “weapon of mass effect” had been discovered near the Port of San Diego in 2011.

Gulftainer is co-owned by Hamid Jafar and the Ruler of Sharjah, UAE, according to World Bank documents. Gulftainer, therefore, is partly-owned by a foreign government, one of many reasons it should have been automatically subjected to a CFIUS national security review.

Shortly after President Obama took power in 2009, officials inside the Obama administration installed Aimen Nabi Mir,  previously the two-term president of the Muslim Youth of North America (MYNA), the youth indoctrination wing of the Islamic Society of North America (ISNA), into the top staff advisory job at CFIUS. ISNA has ties to the Hamas terror network according the U.S. Department of Justice.

Aimen Mir’s new job as CFIUS Staff Chairperson was a top national security position within the Treasury Department. Aimen Mir effectively became the gatekeeper for the CFIUS paperwork, information, and intelligence pipeline that is supposed to help members of the President’s cabinet determine which foreign investments have the potential of harming U.S. national security and should be blocked.

Aimen Mir would end up playing a key role in allowing the Uranium One deal to receive CFIUS approval and preventing any CFIUS review of the Port Canaveral Gulftainer deal.

Aimen Mir, like Robert Mueller, Special Counsel to the Russia Investigation, was previously an attorney at the WilmerHale law firm. Aimen Mir’s father is closely connected to Syed Ghulam Nabi Fai, a Pakistani Inter-services Intelligence (ISI) operative who was arrested by the FBI and sent to federal prison.

The secretly-negotiated “Project Pelican” deal between Gulftainer and Port Canaveral was signed on June 23, 2014. Less than a month later, on July 11, 2014, the Federal Maritime Commission (FMC) stamped the Marine Terminal Lease between Canaveral Port Authority and Gulftainer’s newly-created downstream subsidiary GT USA as “EXEMPT Under the Shipping Act of 1984.”

The Jafars’ long history with weapons of mass destruction, serving and funding Saddam Hussein’s WMD programs would have prohibited them from acquiring the 35 year lease to cargo container operations at Port Canaveral or any U.S. port had the mandated CFIUS review been conducted.

The fact that the Project Pelican operation was permitted to move forward amid an apparent national security stand-down begs the question:  Are there operatives within the United States government working against U.S. national security that allowed the Jafars to set up operations inside Port Canaveral, despite their ties to Saddam Hussein, Russia, Iran, North Korea, and weapons of mass destruction?